Slept very nicely in the rental car, stayed nice and toasty and didn’t have to worry about condensation or wind. I ate some pastries for breakfast and then Michael woke up a bit later. I’m also packing out 3 liters of Hawaiian punch instead of water.  We drove up to where the snowbowl rd and the AZT intersect and we said our goodbyes. The mileage down the trail took a jump because I took the Flagstaff resupply route instead of the walnut canyon route because I needed to resupply of course and I’ve never been to Flagstaff and wanted to be in town! The whole trail mileage is for the walnut canyon route so when the two routes reconnect the mileage jumps for people who took the resupply route. I chose to get on trail at the snowbowl rd because I had already hiked a bunch of the connecting route when we hiked up the trail to Humphreys Peak. So instead of doing some of that again I just got to the first road the rental car could get to, and it’s only a few mile difference.
Started walking at 8 am, a later start than normal because we felt like sleeping in and letting the sun rise some. The morning was freezing and the ground was solid. I crossed many patches of snow but no continuous snow for miles like the hike up Humphreys. There were also beautiful aspen groves that had a very uplifting atmosphere to them. It seemed like a happy place to be with white bark, blue sky, and sunlight hitting me. This is contrasted with the dark, cold and almost creepy conifer forests that was much of the morning. Not a real big fan of solid conifer stands. They are not very biodiverse, they’re dark and nothing much grows on the forest floor there. The soft pine needles are a plus I’ll give them that, and it would be a nice place to be if it were 90 degrees out, but it’s 20 something out and it’s not a fun place to be then. It’s also very windy again today so it’s chilly even when you’re moving. I did finally see a turkey running around on a snow patch today too. I’ve heard them gobbling but haven’t seen one until now. 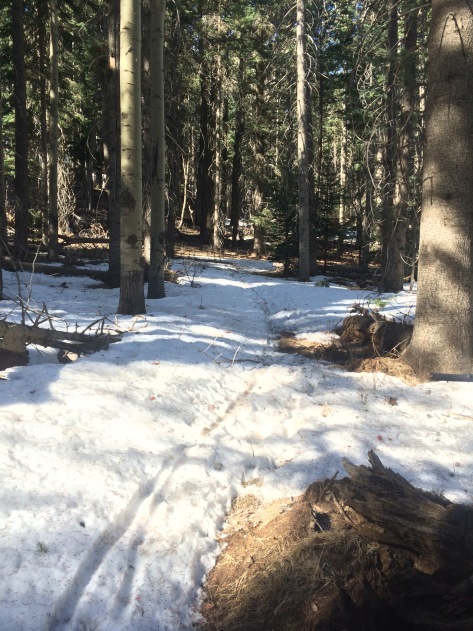 I’m also in kind of a funk I think, I haven’t been in my normal routine of smashing miles and getting closer to finishing for a good while now. With grad school approaching fast, just a month away, a lot has been on my mind! I need to find a place to stay, pack my stuff up and prepare for school. I’m very excited for this and it is a driver to help me finish sooner rather than later. I also can’t wait to get to the Grand Canyon. I’ve never been and Coughee will be around to hike it too!
It’s Easter so I eat hard boiled eggs, Cadbury chocolate eggs and the baby food. Eggs are always on my high craving list out here and so is chocolate but the baby food is new and I approve greatly of it! It’s real cheap, and most of them taste super delicious. One or two were okay, but most were like eating a freaking smoothie. 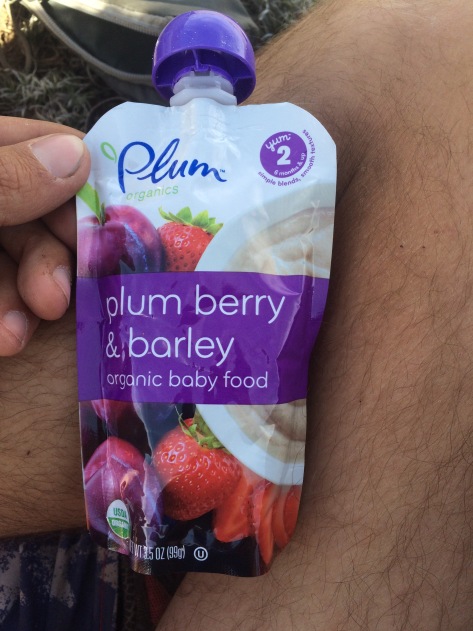 This was the best one. Super tasty.

I carried boiled eggs for 3 days and didn’t get sick so there you go, take eggs. It was pretty chilly most of the time though so I don’t know how they’d last somewhere hot.

The afternoon went by pretty quick. It stayed chilly most of the day because of the wind and high altitude but I finally took off my long johns around 2 pm because it was warm enough in the open juniper hills. The environment changed exactly as I suspected. The morning started out with white pine, bristlecone pine, Douglas firs and other high elevation, cold loving species, down to ponderosa pine forests a little lower and then into juniper hills. Even the junipers gave way to a vast open desert plain for much of the evening. They then occurred only on hillsides it ridges. This left me walking into the most immense, open area I have ever been to. Nothing but grasses, and small shrubs here and there all the way to the horizon in some directions. Behind me the San Francisco Peaks loom in the distance, getting smaller and smaller as the miles tick by. It never ceases to astonish me how far you can walk in a day. I was up there on some of the snow parts of that mountain this morning! Now I’m miles away in the flat desert between there and the Grand Canyon. I think I see the north rim of it in the distance, covered with trees. I know it’s in front of me somewhere but you can’t tell where because it’s flat and then all down from there! But it’s in sight alright. I’m just 55 miles from the south rim and should get a peak of it tomorrow at grandview tower! I didn’t see one single person today other than Michael, this has become more and more common as I’ve gotten farther north. Also the combo of wind and high elevation has kept me cool and I’ve drastically reduced water consumption. Just 2 liters of Hawaiian punch took me the full 35 miles. And of course some big critter is walking around my tent as I write. Me no likey. 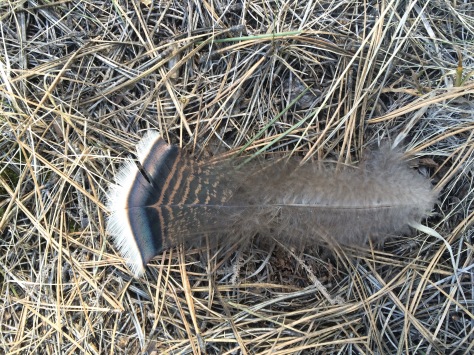 Now that’s a pretty one! 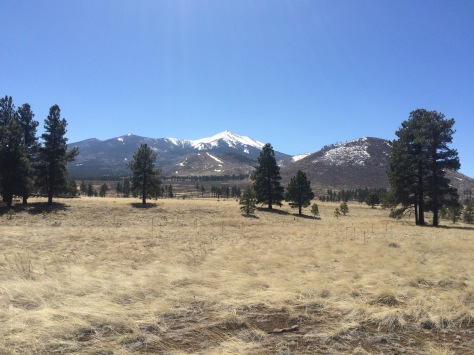 Near the end of the ponderosa forest

I was on the side of that mountain today… Isn’t it crazy how far you can walk in a day?

One thought on “Day 30. From the Mountain to the Flatlands.”

A thru hiking addicted scientist is in love with the natural world.

I'm 27 years old and have loved being outside since I can remember. As a kid I liked catching bugs and putting them in jars, examining them, and then trying to figure out what they were by looking them up in a field guide. I was enthralled to discover something, then be able to identify it and then learn all about it. My interest in all life forms hasn't ceased. Next I became obsessed with reptiles and amphibians, then plants then birds and now fungi. The interest in one subject never waned but was added to all the other subjects since in the real world they all interact. I know a vast number of plant, animal and fungi species and love looking for them and photographing them. I also love to share my knowledge, which is the purpose of this blog! I graduated from West Virginia University in 2012 with a degree in horticulture and then promptly began thru hiking the Appalachian Trail with my friend Buzz Lightyear in June of 2012 and finished in early December. Then April of 2014 I left for the Californian/ Mexican border by myself unsure of what to expect. What I found was the most spectacular landscape imaginable and among this wilderness I met some of the most interesting, friendly and fun people there are. I am very thankful to all of you who made this journey what it was, I came into a world of wonder by myself and left with a whole crew of friends and adventurers.