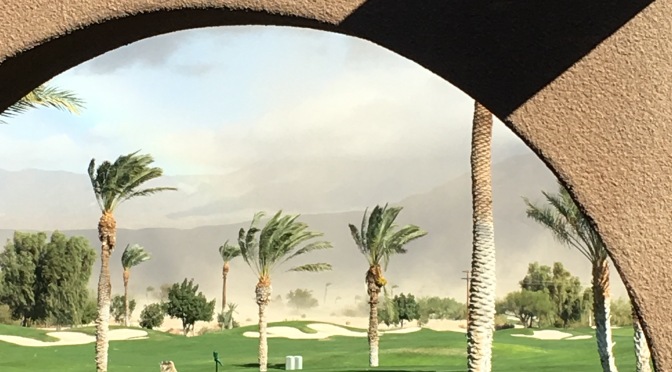 Taking a zero today due to the insane sandstorms and heavy rain. Conditions are suppose to improve by tomorrow morning. For the sake of time and not having to find a way back out to a random part of a wash I’ll have to just miss those 15 miles from the sandstorm to Borrego Springs.

Coughee and me go to the nearby Arches restaurant for breakfast and I eat some big pancakes. 5 other diners are at a table near us and asks if we’re the two guys who got caught in the sandstorm last night. Yep. The lady at the front desk supposedly told of our struggle. We chatted with them for a bit while looking out on the golf course you could see the sandstorm still raging in the desert.

There are grapefruit trees planted all over, filled with fruit so I grab one to eat. As soon as I bite into it, my tongue goes numb. Coughee tries some too and his tongue goes numb. We think pesticide on the outside of the fruit maybe did this, since we had no knife to cut it, we just bit into it. The effect lasted many hours. Wont try that again.

As we’re just laying around with nothing to do all day Coughee makes the decision to go home because he is moving to a new house with Sherrie in a few weeks and he feels bad that she’s doing all the packing. I’m sad that he’s leaving but he’s just being responsible. His friends are coming to pick him up and take me to resupply. We lose power in the hotel for about 30 minutes. Wind must have blown some power lines down. When Shane and Moose arrive, we head to buy some food at the grocery store when we find out the whole town is still out of power. The grocery store says they can’t sell us anything and we go to the liquor store instead because it’s the only place that’s open. They had enough snacks for me to resupply a few days. We get back to the hotel and I say bye to Coughee and his friends. Power is out at the hotel again for a few hours, it comes back on and I pass out by 8 pm. 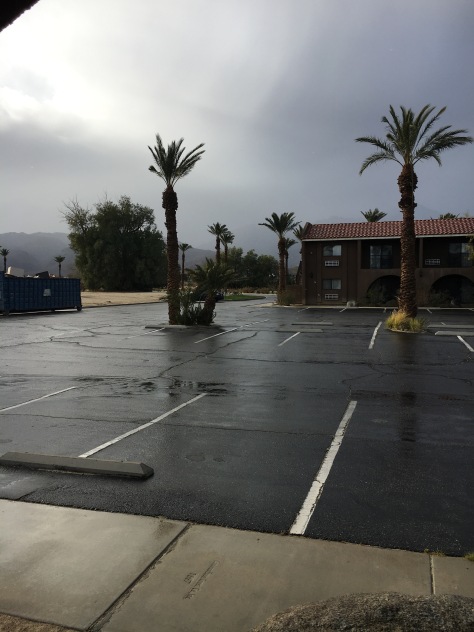 A thru hiking addicted scientist is in love with the natural world.

I'm 27 years old and have loved being outside since I can remember. As a kid I liked catching bugs and putting them in jars, examining them, and then trying to figure out what they were by looking them up in a field guide. I was enthralled to discover something, then be able to identify it and then learn all about it. My interest in all life forms hasn't ceased. Next I became obsessed with reptiles and amphibians, then plants then birds and now fungi. The interest in one subject never waned but was added to all the other subjects since in the real world they all interact. I know a vast number of plant, animal and fungi species and love looking for them and photographing them. I also love to share my knowledge, which is the purpose of this blog! I graduated from West Virginia University in 2012 with a degree in horticulture and then promptly began thru hiking the Appalachian Trail with my friend Buzz Lightyear in June of 2012 and finished in early December. Then April of 2014 I left for the Californian/ Mexican border by myself unsure of what to expect. What I found was the most spectacular landscape imaginable and among this wilderness I met some of the most interesting, friendly and fun people there are. I am very thankful to all of you who made this journey what it was, I came into a world of wonder by myself and left with a whole crew of friends and adventurers.